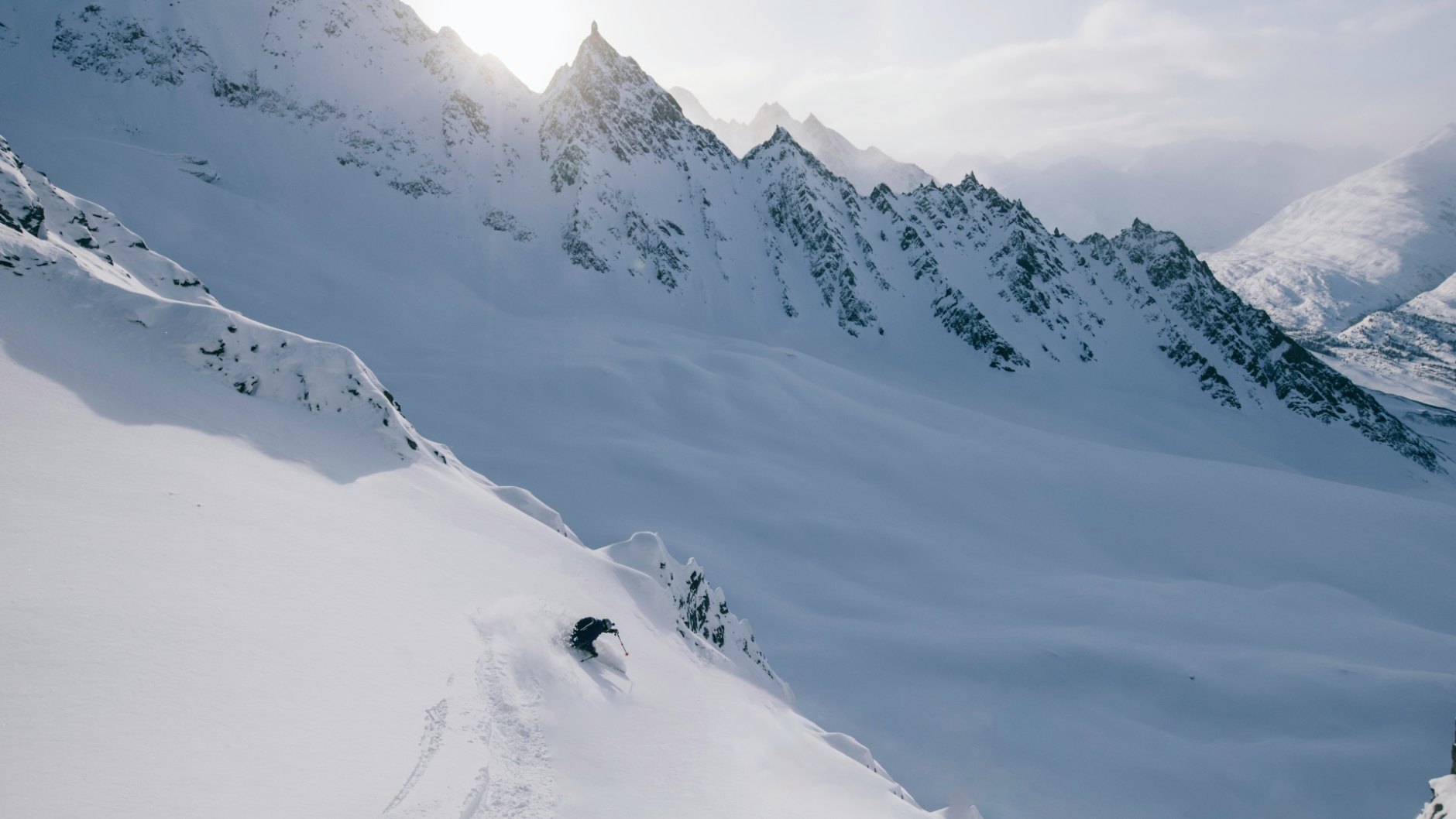 [Andy Cochrane] “This isn’t a TGR film, we keep it pretty controlled,” said Matt Bohne, a soft-spoken avalanche forecaster, Wyoming native, and our heli-skiing guide for the week. Near 10 a.m. on our first day in Alaska, I naively believed him.

After a 45-minute safety briefing that covered everything from slab avalanches to helicopter decapitation, I was scared shitless, but I used my goggles and mask to hide the nerves. We did a quick beacon drill and an airbag pack tutorial, and then I followed the others into the waiting helicopter. Buckled up tightly, I nodded at the pilot, a Frenchman named Jean Louis.

Based thirty miles inland from the Pacific Ocean, Valdez Heli-Ski Guides sits in the heart of the Chugach Mountains and is surrounded by sharp peaks with leg-burning 4,000-foot descents. Tsaina Lodge, the operation’s headquarters, was founded over thirty years ago by iconic freeskier Doug Coombs. In the years since, it has established itself as the premier heli-skiing operation in Alaska. Most of the guides have worked at Valdez Heli for decades, each with thousands of steep descents to substantiate their expertise.

At least, that’s what the brochure said. I wanted to see for myself. 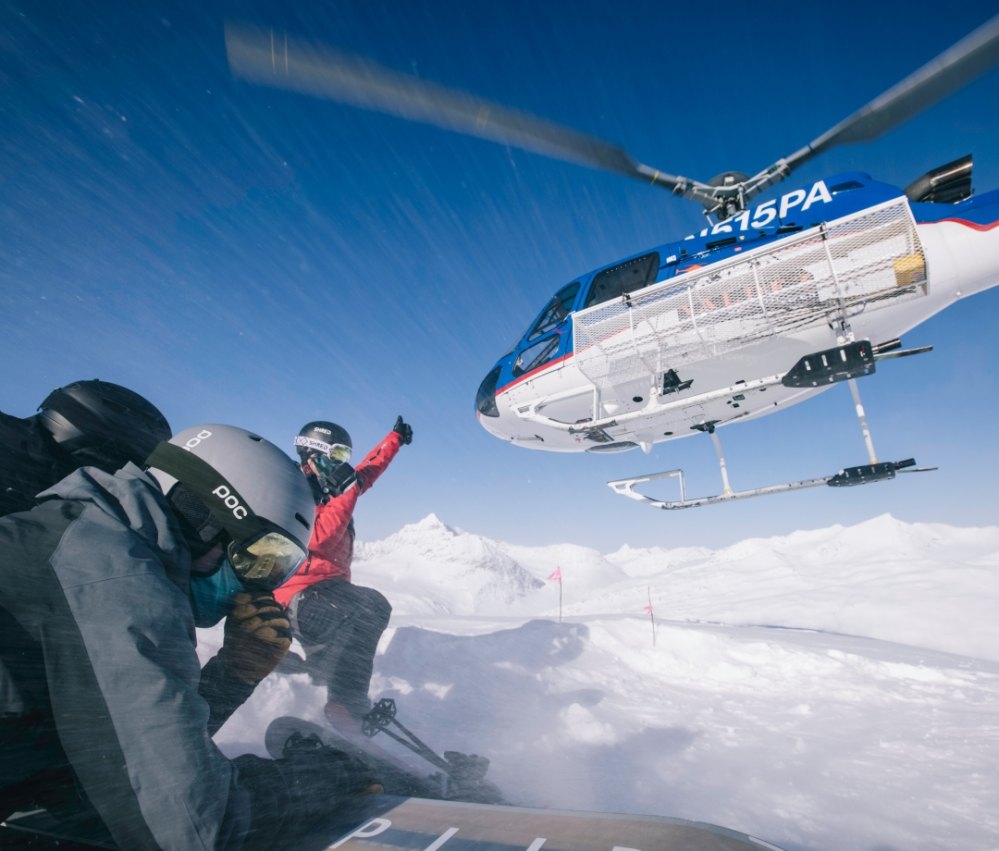 Straight to the Top

After ten minutes and several rollercoaster-esque banking turns in the heli, we landed, although “landed” is a relative term. The front of the cockpit was hanging two feet off a sheer 2,000-foot cliff, and the tail was perched precariously over a large cornice. My only sense of security came from Jean Louis’ calm demeanor. He balanced the chopper’s skids on the snowy ridge on his first attempt, like a parent dropping their kids off at middle school.

He motioned for us to get out. I followed instructions, unbuckling, putting one boot down on a skid, ducking my head, and cautiously leaping into the void, praying the snow beneath my feet wouldn’t give way. You probably wouldn’t be reading this story if it did.

The wind was calm but the rotor wash kicked snow around like a hurricane. The logical side of my brain argued that this whole heli-ski experience was a terrible idea, but the other half, a mischief-making 12-year-old-boy, won out. Matt unloaded our skis from the basket, placed them in the snow in front of us, and gave Jean Louis a thumbs up, signaling it was safe to take off. Watching the machine fly out of sight, I scanned the horizon for the first time. No people, trees, animals, or any signs of life. Just snow and jagged, fear-mongering mountain peaks.

Looking back, that first landing was probably safer than it felt in the moment. Over the course of the week we skied thirty-plus laps, each time getting more accustomed to the patterns of the pilot and guide as they scouted for good snow, safe landing spots, and fun lines to ski. After a day or two it became clear that this work was old hat for both Matt and Jean Louis, along with the rest of the guides. 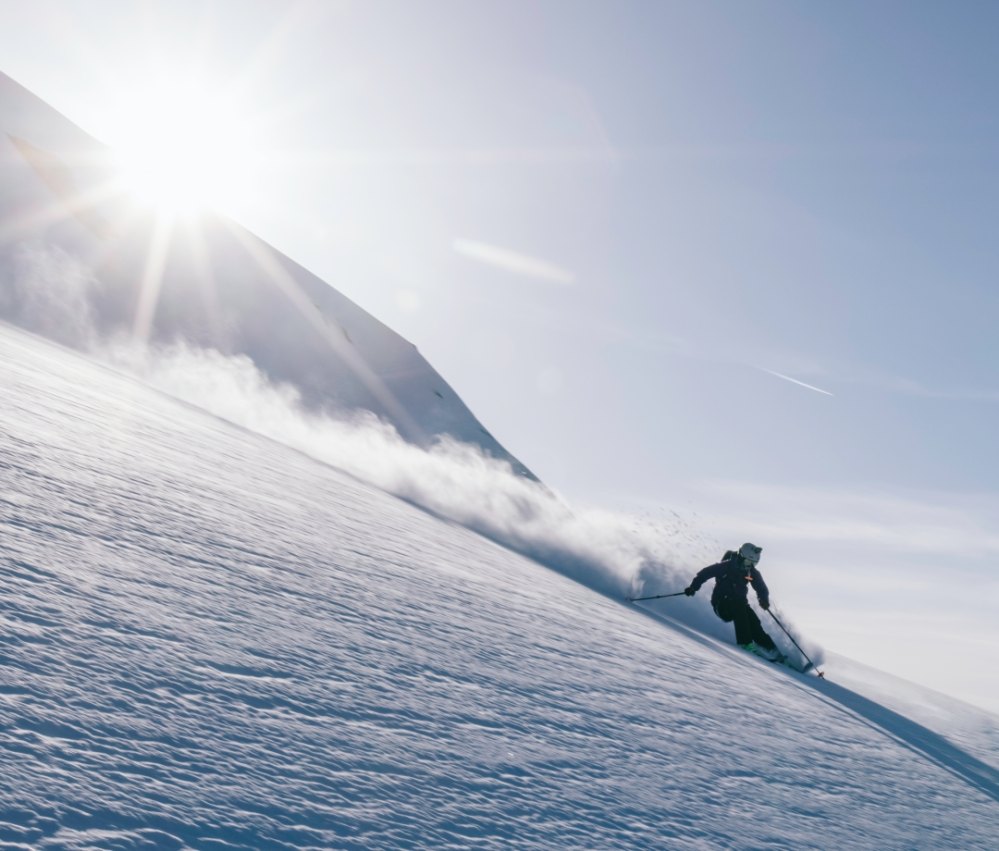 Clicking into my skis, the excitement started to build and the nerves faded. Helicopters are relatively new to me, but fat powder skis are not. I threw on my airbag pack and silently laughed at myself, thinking about how lucky I was to be here, standing atop a ridge with just three others, seconds before some of the best skiing of my life.

Matt calmly explained the best lines for us to ski and the potential hazards in front of us, all in fewer words than this sentence. Not one for waxing poetic, he nodded at us and we acknowledged back. Then he led the way, carving controlled turns and leaving a billowy plume in his wake. What Matt lacked in gregarious chatter he made up for in smooth style on skis. Watching the snow turn to smoke in front of us, it was impossible not to hoot and holler with excitement.

We dropped in one at a time, spread out by a 30-second count. The first lap was intended to get our legs under us. We followed a lower-angle ridgeline from the summit all the way down to the glaciated floor of the valley. This gave the three of us a chance to get a feel for the terrain and see a few sluffs without much consequence. We took our time over the first few runs and slowly built confidence in the stability under our planks.

Meeting up as a group at the bottom of the first run, we didn’t say much to each other. Our mouths agape and minds blown, it took just one descent to understand why many people get addicted to heli-skiing, especially here in Alaska. While most of life involves stability and routines, heli-skiing unlocks a more innate desire: feeling alive. 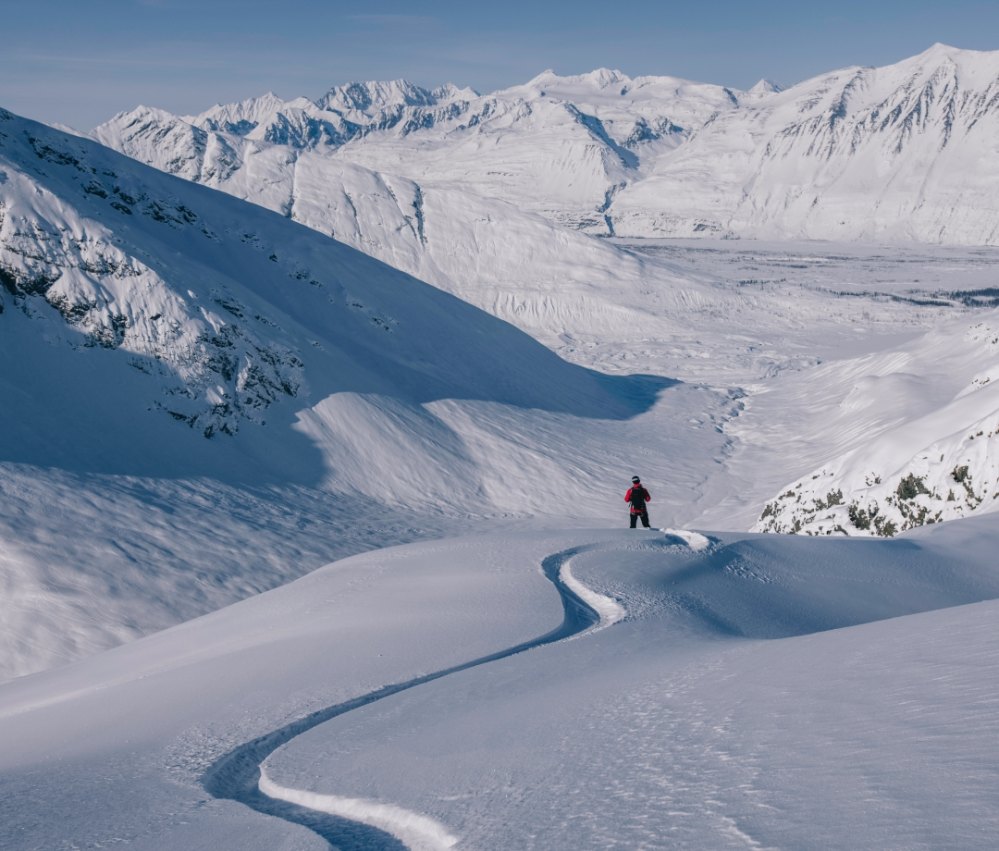 When our skis and gear were organized in a pile, Matt radioed to Jean Louis and within a few minutes we were airborne again, searching for a new line to ski. These short flights, or “bumps,” as the guides called them, would sometimes be just a quick hop across the valley but could also involve multiple loops to find a safe and compelling line.

We watched curiously as Jean Louis and Matt chatted in their headsets, pointing at slopes, and craning their necks from side-to-side. At first I found this a bit ironic. Doesn’t everyone get fresh tracks in Alaska? But as the days went by I realized how important this part of the equation was. Wind buff and sun exposure can scuttle good snow quickly. Plus, if you’re gonna fly around in a helicopter, you should hunt for the best stuff. 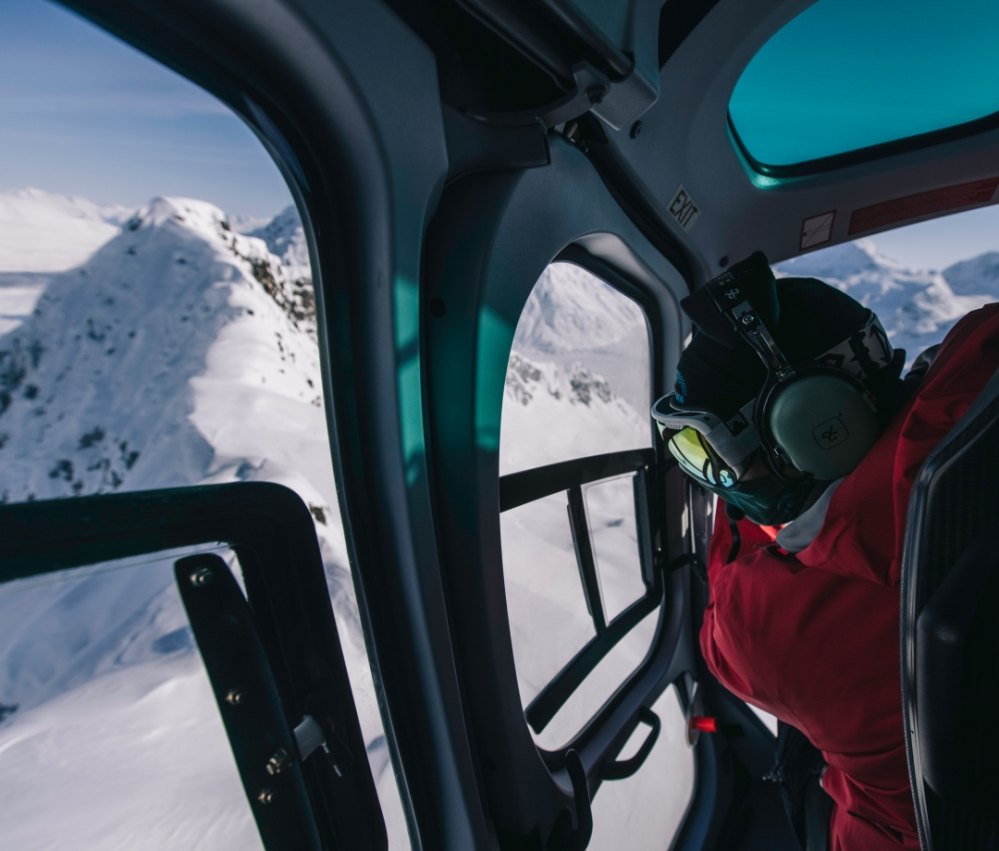 The next three laps were similar to the first, if not better. We stayed mostly on shaded, northerly aspects, trying to avoid marginal snow. At these northern latitudes, the treeline is just a few thousand feet above sea level, and we were topping out around seven or eight thousand feet. Without trees, even relatively minor gusts of wind can change the snow surface quickly, making the skiing less than ideal.

As the day progressed we moved into steeper terrain, often skiing lines one at a time from top to bottom, to mitigate the risk of multiple people being caught in the same avalanche (if one were to occur). Nothing we skied came close to the spines and cliffs you see in the movies—and I was grateful for it, because that stuff is well above my pay grade.

Still, those turns were some of the best of my life. We’d hit untouched, knee-deep powder for thousands of feet, then rinse and repeat. We were living a week-long dream, and we were determined to soak it up. 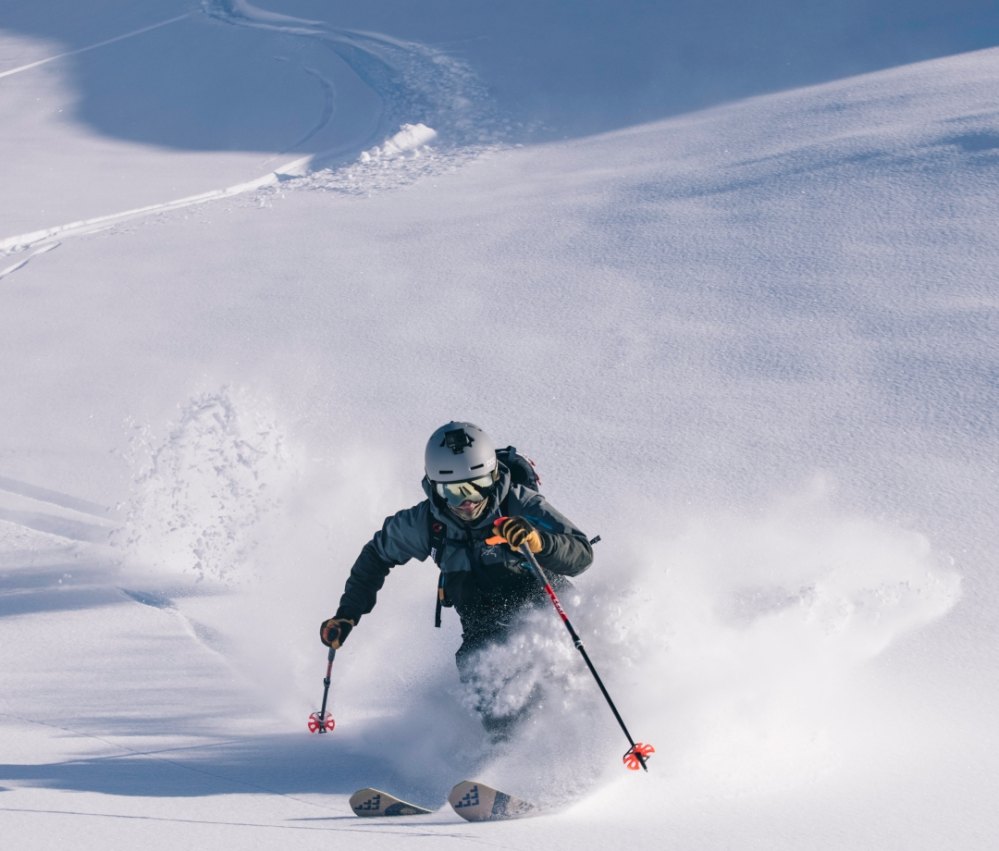 Eating a late lunch at 2:30pm, we finally had our first still moment of the day. I sat on my skis and […]